This month’s birthstone is Emerald

ere are ten of the world’s rarest and most exclusive gemstone species, listed in no particular order except the most expensive one is at the bottom. I’ve excluded stones that are impractically soft, hazardous, or just plain uninteresting. Some of the following are surprisingly affordable, simply because the general public doesn’t know or care about them and thus demand is relatively weak.

✧ Note: For what may well turn out to be quite literally the RAREST GEMSTONE ON EARTH, see the Deep Thought entry here. Skip to: Painite ✧ Serendibite ✧ Poudretteite ✧ Grandidierite ✧ Jeremejevite ✧ Red Beryl (Formerly Bixbite) ✧ Taaffeite ✧ Musgravite ✧ Benitoite ✧ Red Diamond PAINITE has in years past been described by the Guinness Book of World Records as the rarest gem mineral. As of early 2005 there were eighteen known specimens, all numbered and accounted for1. Specimen No. 5 has been faceted into an oval and weighs 2.54 carats. Pricing can be fickle with such oddities, but in 2011 I saw a very fine one on sale for about $1800 per carat.

Painite is pink to red to brown in color, very strongly pleochroic (showing different hues from different angles) and it fluoresces a lovely green under short wave UV. It comes from Mogok and Kachin State in Myanmar and was named after its discoverer, British gemologist Arthur Charles Davy Pain.
⌅⌅
SERENDIBITE, not to be confused with serandite, is a cyan colored stone that comes from Sri Lanka. It boasts an unusually complex formula consisting of calcium, magnesium, aluminum, silicon, boron and oxygen. So far there exist three faceted specimens of 0.35 carats, 0.55 carats and 0.56 carats. The first two were discovered by rare stone specialist D. P. Gunasekera and purchased by the late Prof. E. J. Gübelin of Switzerland. The larger of those two is shown to the left; the smaller was sold for about $14,300 per carat. The name comes from the old Arabic term for Sri Lanka, Serendib, as referenced in The Sixth Voyage of Sindbad and elsewhere.
⌅⌅

A faceted 3-carat purple gemstone from Magok, Myanmar, was discovered to be a POUDRETTEITE in 2000. By December 2004 nine more gem-quality pieces had been found there, including a pale pink one that has been faceted to 9.41 carats. At a Mohs hardness of 5 poudretteite is the softest stone on this list — too scratchable for a ring but suitable for earrings, a pin or a pendant if care is exercised. Previously this substance had been known as a rare mineral of tiny colorless crystals, discovered in 1987 and named after the Poudrette family that operated the source quarry at Mont Saint-Hilaire, Quebec.

GRANDIDIERITE is a bluish green mineral found primarily in Madagascar. The first and so far only clean faceted specimen, from Sri Lanka, was originally mistaken for a serendibite and subsequently purchased in May 2000 by Prof. Gübelin from Murray Burford. Grandidierite is trichroic, transmitting blue, green and white light. The mineral is named after French explorer and natural historian Alfred Grandidier, who among other things unearthed bones from the extinct half-ton elephant bird in Ambolisatra, Madagascar.

⌅⌅
JEREMEJEVITE, pronounced ye-REM-ay-ev-ite, is a colorless, sky blue or pale yellow stone, the highest quality of which comes from Namibia. In nature it occurs in small obelisk-shaped crystals and has in the past been mistaken for aquamarine. It was named after Russian geologist Pavel Jeremejev who discovered the mineral in 1883. Prices for eye-clean specimens hover around $1400 per carat. The oval-cut sample at near left, provided by Jehan Fernando, weighs about 60 carats (23.8 x 21.8 x 16.3 mm).
⌅⌅

Closely related to emerald and aquamarine, but vastly rarer than either, is RED BERYL. Mineralogist Maynard Bixby discovered this treasure in an area near Beaver, Utah in 1904. Since that time it has been commonly known as bixbite in his honor; but since the term can be so easily confused with bixbyite, a different mineral also named for Bixby, the World Jewelry Confederation now strongly discourages it.

Beryl is a compound of beryllium, aluminum, silicon, and oxygen. As with most gemstones its various colors derive from trace metals: in this case iron for aquamarine and golden beryl, chromium (and sometimes vanadium) for green beryl and emerald, cesium and lithium for pezzottaite, and manganese for morganite and red beryl2. Like emerald, facetable quality red beryl generally comes with mild to moderate inclusions which simply add to its visual novelty and make each stone unique.

Sources are limited to several small plots in Utah which have always proven excruciatingly difficult to exploit economically, so supply is strained at best. According to some published estimates, ruby of similar caliber is around 8000 times as plentiful. So even at $2,000 to $10,0003 per carat, many might consider red beryl quite underpriced.

⌅⌅
TAAFFEITE is a mauve-to-purple-to-red stone named after Bohemian-Irish gemologist Richard Taaffe who discovered the first one from a box of Sri Lankan spinels in 1945. The stone displayed a double refraction which was uncharacteristic of spinel. If you could round up all the faceted taaffeites currently in existence they would fill about half a cup. Of the rarest red variety there are fewer than ten specimens.

Clean colorless-to-mauve stones go for between $500 and $4000 per carat depending on the color strength, cheap for something over a million times scarcer than diamond. The record holder appears to be the 9.31-carat specimen shown to the right.

⌅⌅
There is another species chemically and optically similar to taaffeite, MUSGRAVITE, which is even rarer. Facetable musgravite was first reported in 1993; as of 2005 there were eight such specimens, three of those identified by Murray Burford. The mineral was discovered in 1967 at the Musgrave Range in South Australia, but has since then turned up in Greenland, Madagascar and even Antarctica.

It’s not unlikely some stones thought to be taaffeites by their owners are actually musgravites. Micro-Raman spectroscopy, which uses a green laser, can quite handily distinguish the two.
⌅⌅
BENITOITE is found only in San Benito County, California. The stone is a strong blue with a dispersion similar diamond's, and fluoresces an intense blue-white under UV light. The largest faceted benitoite weighs 15.42 carats, but stones over one carat are rare.

In 1974 someone stole a flawless 6.52-carat pear-shaped specimen from the Zurich airport and it’s still missing. (I wouldn’t hold out much hope. They probably fenced it by cutting it down into two or more smaller stones.) In 1985 benitoite was designated the state gemstone of California. Like taaffeite, benitoite in small sizes goes for between $500 and $2000 per carat.
⌅⌅

How’s this for a Scrooge McDuck fantasy: Imagine you’re the first human on record to witness an erupting kimberlite pipe. Along with an earsplitting roar you’d see a kind of geyser shoot into the sky and shower the immediate area with sand, stones, and what would appear to be fragments of glass.4

Though the most recent such event likely dates back at least 10 million years, DIAMONDS, in general, are not at all rare. Annual world production of gem-quality diamond exceeds sixty million carats. This equals twelve metric tons and would fill about 145 bushel baskets. (Keep that in mind the next time you pony up several grand for an engagement ring stone.) 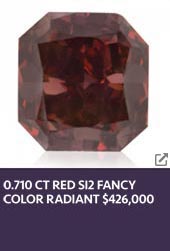 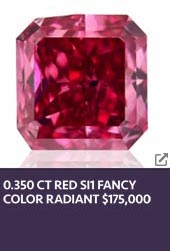 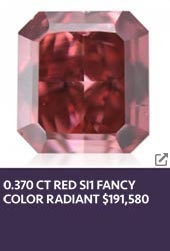 But strongly colored diamonds, called fancies, can be genuinely scarce. About one carat out of every 10,000 sold is a fancy. Their hues span the entire spectrum, but among them a true, saturated red is by far the rarest. At this writing there are around three dozen red diamonds currently known and most weigh under half a carat.

The largest is the Moussaieff Red at 5.11 carats, cut from a 14-carat rough found by a Brazilian farmer and displayed at the Smithsonian in 2003. So far the clearest (VS1) and most highly saturated in color is the 0.59-carat Rob Red, named after it owner and lifelong fancy diamond specialist Robert Bogel.

Per carat prices for natural, untreated red diamonds range from about $350,000 to $1.9 million which makes this substance one of the world’s most concentrated nonradiological forms of wealth.

1. Though many more have been found since that time.

2. The manganese ions tinting morganite and red beryl are different, however: manganese of oxydation state +2 for morganinte, +3 for red beryl.

3. Red beryls at the high end of this range will be large, exceedingly clear, and deeply colored. Virtually nonexistent, in other words. Proper certification would be essential since there’s similarly clear, chemically identical red beryl coming out of factories for around $7.00 per carat rough. (It can be distinguished from the natural article microscopically.)

4. Speaking of such things, here’s a volcano that spews GOLD (stale link alert).