ere’s for eccentricity. Outside of mineralogical and metaphysical circles it’s a pretty safe bet most people have never heard of any of these. Alphabetically they are evenkite, hackmanite, haüyne, icosahedrite, lonsdaleite, muromontite, pezzottaite, proustite, shungite, and thortveitite. The single cut specimen of that last item, named Deep Thought by its discoverer, is especially perplexing in that we can be absolutely sure it’s either (1) a genuine, once-in-a-lifetime anomaly, or (2) a clever though unfathomable hoax.

There are three more ultralight hydrocarbon minerals akin to evenkite and similarly obscure. In order of increasing weight they are dinite, fichtelite, and hartite with densities approximating 1.02, 1.03, and 1.05 gm/cc respectively. Fichtelite has 19 carbons; both dinite and hartite, 20. All three are colorless when pure and show up in petrified wood. Dinite comes from Tuscany, fichtelite from Bavaria, hartite from Tuscany and Austria.

⌅⌅
One of the weirdest properties in the gemstone repertoire is something called tenebrescence or reversible photochromism. That’s when the color changes from exposure to light, like self-adjusting sunglasses, and then back again after a period in darkness. Several other stones will do this but HACKMANITE, especially some of the varieties from Afghanistan and Burma, carries this effect to extremes as you can see in the photo: pale blue by night, deep purple by day.

A member of the sodalite or “Princess Blue” group, hackmanite distinguishes itself by the additional presence of sulfur in its makeup. Though discovered in Greenland way back in 1896 it’s still relatively unknown. It’s too soft for a ring or any other application that may take much of a beating, but fine for something like a pendant. It glows orange to red under UV.

⌅⌅
Another sodalite species, HAÜYNE (ah-ween) has sulfur like hackmanite but also incorporates calcium, bound water, and sometimes potassium. One of the more rarely isolated components of lapis lazuli, haüyne is mostly famous for its almost supernatural-looking blue color.

That splendor comes at a premium, though, since like hackmanite haüyne’s fragility (a Mohs hardness of 6.5 to 7 combined with some brittleness) largely confines it to pendants, brooches and such, or genteel show-and-tell among collectors of the exotic. René Just Haüy (1743-1822) was a pioneer in crystallography and narrowly missed the guillotine during the French Revolution.

⌅⌅
ICOSAHEDRITE, which took ten years of focused exploration to discover, so far appears to be our planet’s only naturally occurring quasicrystal. While the atomic layouts of all other crystalline minerals consist of repeating patterns, icosahedrite manages to sidestep this principle yet still exhibit an ordered lattice.

A good visual analogy would be the Penrose floor pattern you see to the left. Each tile connects to its neighbors according to strict rules, yet no matter how hard you look you’ll find no periodic replication in any direction.

Icosahedrite was found in Russia’s Kamchatka region in the form of tenth-millimeter grains mixed with serpentine. It’s an opaque, metallic-looking compound of aluminum, copper, and iron. Along with everything else, researchers are now certain icosahedrite is extraterrestrial. The bodies that brought it here were carbonaceous chondrites roughly similar in composition to Mars’s moons Deimos and Phobos.

⌅⌅
Speaking of extraterrestrial, there’s a powerful contender for the title of Hardest Natural Mineral called LONSDALEITE. Like diamond it consists of pure carbon; but while diamond is an octahedral crystal londsdaleite is hexagonal. The imperfect granules found in the wild fall well short of diamond’s Mohs hardness of 10. But since claims for pure, lab-grown lonsdaleite routinely exceed 15, maybe it’s just a matter of scoring higher-quality material out there. The story began in 1967 when mineralogists first identified its crystals, intermingled with diamond within the ejecta from Meteor Crater in Arizona. Since that time lonsdaleite has turned up in meteorites from India, Antarctica, Australia, and Ontario and from soils in Ukraine, the Kola Peninsula, the Tunguska explosion area, and elsewhere. The stuff is translucent and brownish but in most other ways quite diamond-like.

Lonsdaleite’s name honors diminutive X-ray crystallographer and chemistry professor Kathleen Yardley Lonsdale (1903-1971). “It makes me feel both proud and rather humble that it shall be called lonsdaleite,” she remarked. “Certainly the name seems appropriate since the mineral only occurs in very small quantities (perhaps rare would be too flattering) and it is generally rather mixed up!”

⌅⌅
Strange but true: Any uranium or thorium ore may harbor microscopic wisps of plutonium and/or neptunium, as both can arise from natural radioactive decay. About one part per trillion of plutonium was in fact secretly discovered by Berkeley physicists in pitchblende in 1942. MUROMONTITE, though, bears the distinction of being the most plutonium-rich of anything found so far in the ground.

Among radio-minerals, muromontite is a special case. A particular Swedish variety of it juxtaposes its uranium (element 92) with beryllium. As the uranium decays, some of the alpha particles it radiates get absorbed by the beryllium. The beryllium in turn ejects protons. When a not-yet-decayed uranium nucleus gets a square hit from one or more of those, it can transmute up to plutonium (94), or even more rarely neptunium(93) and americium (95). Naturally occurring transuranics like these lie far below any rational threshold of concern. What’s troubling is the 20 tons or so of plutonium the nuclear industry churns out annually.

⌅⌅
The beryl variety PEZZOTTAITE is particularly special in view of its oddball lithium and cesium content, the departure from its siblings (aquamarine, emerald, heliodor, etc.) of its crystal structure, and its lovely magenta color. It was discovered near the Madagascan village of Ambatovita in 2002 but that source has run dry. Pezzottaite generally comes with moderate to heavy inclusions, in the latter state often cuttable into stunning cat’s eyes. Unlike most gemological exotics it’s durable enough to wear without much worry.

Dr. Federico Pezzotta is Curator of Mineralogy at the Museum of Natural History in Milan. He lectures widely and has authored or co-authored Beryl and Its Color Varieties, Madagascar: A Mineral & Gemstone Paradise, and The Italian Island of Elba: A Mineralogical Jewel in the Tuscan Archipelago.

⌅⌅
If you’ve ever seen PROUSTITE (“ruby silver”) it was likely tucked away in a special booth in the mineral section of a museum. Pushing a button activated a light to give you a quick peek.

The reason for this cloak and dagger is that proustite is nature’s version of photographic film. Freshly excavated, the choicest crystals are transparent and spectacularly red with a metallic luster. But intemperate exposure to light over time makes them cloud up and blacken permanently. Proustite is a compound of silver, arsenic, and sulfur and you’re basically seeing the silver take over.

In or out of the dark this mineral is much too delicate for any kind of jewelry and although a wary cutter may facet it occasionally — for the sake of novelty — most collectors would freak out at the notion of sacrificing their specimens that way. Proustite gets its name not from Marcel but Joseph Proust (1754-1826), a French chemist who established the Law of Proportions for compounds.

So what’s your favorite form of coal?

There’s something called SHUNGITE (pron. shoon-gite) being marketed quite breathlessly these days through the New Age circuit. You’ll find it polished into the shapes of pyramids, cubes, eggs, spheres, various talismans, and, for the budget-minded, freeform tumbled stones. It’s touted as a water purifier, cure-all, evil-repeller, virility-reinvigorator, and so on and so forth. I’d save my money.

But one thing that makes shungite quite special for a mineral is that it most certifiably contains fullerene molecules. Those are the hollow spheres of carbon atoms, first identified in 1980 and subsequently named after futurist and geodesic dome inventor Buckminster Fuller.

Right now fullerenes, especially those of the classical 60-atom version shown to the right, lead some cutting-edge research in a number of technologies. Pure synthetic C 60 costs around $18,000 per pound. A few years ago there was talk of procuring fullerenes far more cheaply by refining them from shungite, but in the final analysis the stuff fell a dispiriting number of decimal places shy of justifying such a scheme. An interesting thought, though. Sort of like mining plutonium from muromontite.
⌅⌅

ne fine day in 2004 a purplish pebble turned up in Bangkok in a batch of rough gemstones from Africa. It fell to the floor at one point and split off a fragment, which was saved. After the stones were all cut, a routine series of tests revealed that the purplish one didn’t resemble anything previously known.

The fragment was taken to the Natural History Museum in London and analyzed with a Cameca SX50 electron microprobe, then it and its faceted 10-carat parent were further scrutinized with a Raman spectrometer at Kingston University. The study as reported by the team of Chapman, Mercer, Rankin, and Spratt identified the samples conclusively as THORTVEITITE (tort-vi-tite), an otherwise unremarkable mineral that’s a rich source of scandium.

But no one has ever seen that mineral in the form of a beautifully clear, facetable gemstone. Unless other thortveitites have been floating around, misidentified as other species, this would be one-in-a-trillion. Ultrapure thortveitite can be synthesized, to be sure, but this stone shows mild inclusions suggestive of a natural source.

It shouldn’t be hard to fake a river-jostled pebble with a few imperfections. But then how could such an object have ended up in that package of rough, with the perpetrator assured ahead of time it would be noticed and so painstakingly analyzed and announced to the world? And how would he or she have ever profited? It’s been quite a few years now and no other specimens like Deep Thought have surfaced.

Thank you for drawing attention to the discovery of this beautiful and rare gemstone.

It’s disappointing that more has not been reported as it makes it very creditable gem.

I believe wholeheartedly that it is of natural origin as I cut the stone that is pictured in the article. I noted a substantial number of attributes such as anomalies in the crystal lattice which were not easily photographed. This further supports the stone is natural. 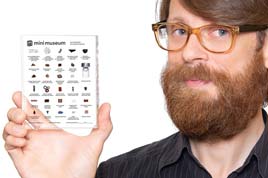 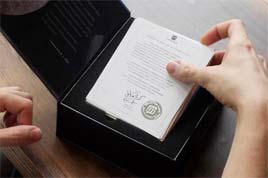 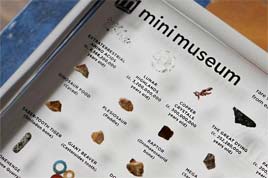 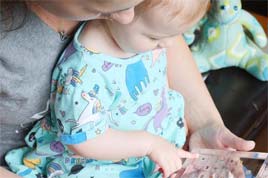 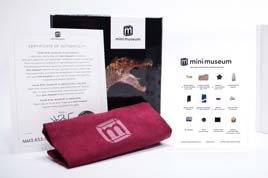 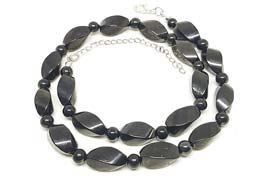 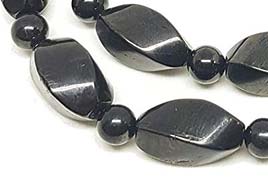 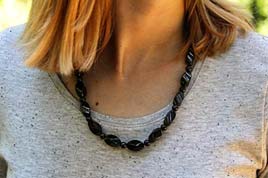 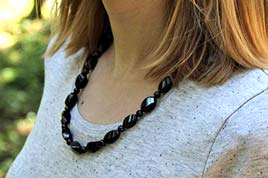 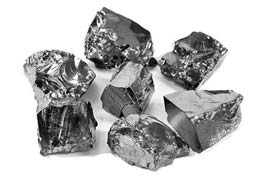 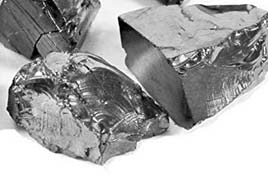